NEWS  FLASH!    Adam Smith saw capitalism as drawing together economics & morality.  He did not see it as an bare-knuckled, no-holds-barred approach to accumulating masses of money while leaving masses of victims in our wake.  In his world-shaking The Wealth of Nations, he laid out his theory that rational self-interest & free market competition are the best path to a nation's economic prosperity.  While his book laid the foundation of modern economics, he would have been horrified at the idea of making money for the sake of wealth alone.

Smith wasn't a dewey-eyed idealist.  He realized that for every wealthy person, there were hundreds of poor ones, but saw the wealthy therefore had a natural obligation to help lift up the lives upon which their fortunes were based:
“It is not very unreasonable that the rich should contribute to the public expense, not only in proportion to their revenue, but something more than in that proportion.”


On extreme wealth inequality?
“No society can surely be flourishing and happy of which by far the greater part of the numbers are poor and miserable. ” 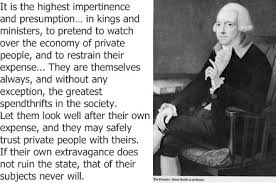 On facts v. feelings?
“Science is the great antidote to the poison of enthusiasm and superstition.”

Paying forward to those with fewer blessings?
“Though our brother is upon the rack, as long as we ourselves are at ease, our senses will never inform us of what he suffers. They never did and never can carry us beyond our own persons, and it is by the imagination only that we form any conception of what are his sensations...His agonies, when they are thus brought home to ourselves, when we have this adopted and made them our own, begin at last to affect us, and we then tremble and shudder at the thought of what he feels.”

“How selfish soever man may be supposed, there are evidently some principles in his nature, which interest him in the fortune of others, and render their happiness necessary to him, though he derives nothing from it, except the pleasure of seeing it.” 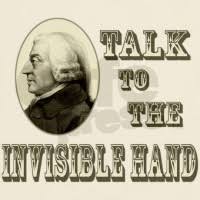 Payment of sufficient wages for work performed?
“In regards to the price of commodities, the rise of wages operates as simple interest does, the rise of profit operates like compound interest. ~  Our merchants and masters complain much of the bad effects of high wages in raising the price and lessening the sale of goods. They say nothing concerning the bad effects of high profits. They are silent with regard to the pernicious effects of their own gains. They complain only of those of other people.”

Morality in business & government?
“What is prudence in the conduct of every private family can scarce be folly in that of a great kingdom.”

Seeking a greater good as well as profit?
“Every individual is continually exerting himself to find out the most advantageous employment for whatever capital he can command. It is his own advantage, indeed, and not that of the society which he has in view. But the study of his own advantage naturally, or rather necessarily, leads him to prefer that employment which is most advantageous to society... He intends only his own gain, and he is in this, as in many other cases, led by an invisible hand to promote an end which was not part of his intention” 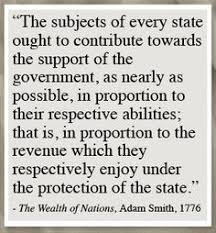